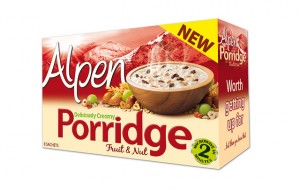 Alpen, which is owned by Weetabix (I only found this out just recently), is best known as a line of muesli. When I was growing up Alpen was considered a luxury product. I’m not sure if it still is, but it’s definitely as cheap to buy now, as many of the alternatives.

So what about porridge?

Alpen recently launched a range of quick and easy (and tasty) porridge.

Their advertising for the new porridge range sums it up:

Grab a sachet. Open it and chuck the contents into a microwave friendly bowl.

(Word of warning, however, opening the sachets isn’t as simple as ripping them open. I tried that. I couldn’t open them. I ended up resorting to using a scissors.)

Fill the sachet with milk up to the line and then pour that over the porridge in the bowl. Mix it and then microwave it for 2 minutes.

Nutrition-wise the porridge is pretty good at only 155 calories

Eating better and having a generally healthier lifestyle is a nice goal, but it’s not easy.

One of the (many) problems with losing weight for me is that I need some kind of structured plan to follow. I’ve looked at various diets in the past, but I really don’t want to have to read a 300 page book before I can start a diet. A lot of the online services for tracking progress that I found were very American and referred to Imperial measures and foods that you simply can’t get in Ireland.

Some people have had a lot of success with WeightWatchers, but I’m really not interested in joining a group or making that kind of commitment, as I travel quite a bit and work odd hours.

So what other options are there?

One that I found is Tesco Diets.

It’s an online system (obviously) which allows you to provide all your details (weight, height, age) and you can then choose from a wide variety of diet plans.

In my case I opted for the Mediterranean diet, which has quite a lot of fresh fruit, vegetables and salad.

I’m going to try to stick with it for a couple of weeks and see how things work out. If the Mediterranean option isn’t optimal I can switch to one of the other plans available.

What I like about their system so far is that it’s quite flexible. If you don’t want to eat something you can edit your diet plan and swap it out for something that you actually like.

The online portal generates a weekly shopping list for you and you can easily mark off any items that you already have before generating a printable list to take shopping.

One thing that is “odd” is that while you can choose between a variety of supermarkets (and the plan supposedly adjusts for this) even choosing Tesco gave me items on the list that I simply could not find in my local Tesco. I’ll have to swap them out on the daily meal plans to compensate.

Lunch is meant to be:

So today will be a vegetarian day by the looks of things, which doesn’t really bother me.

There’s also an option on the “menu” for a snack of cracker and peanut butter.

I’m allowed as much herbal tea and water as I want, though there’s a limit on the number of cups of coffee I can have. This won’t be an issue at the weekend, but I’m not so sure how that’s going to play out during the working week.