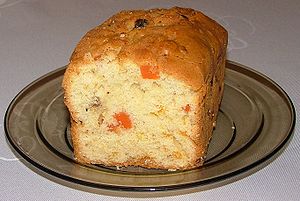 This weekend was my birthday, so I “broke out” a small bit and had a couple of slices of fruit cake.

That cake was much more “expensive” than I was expecting.

A slice of fruit cake (no icing or anything extra on it) weighs in at around 160 calories!

When you’re counting calories against a daily limit a slice of cake becomes a lot more than a mere “slice” – it is now a percentage of my daily limit.

And of course it’s not just calories that matter, or else you could eat rubbish and keep below the limit.