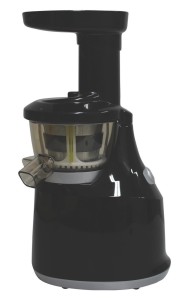 I took delivery of the Hurom juicer yesterday. I wasn’t sure what to expect and I still haven’t explored all the device’s options yet, but I will over time.

To start with the box itself was heavier than I was expecting. In some ways this is a good thing. If it’s heavy then it’s probably going to last longer than a flimsier machine. The build quality of all the machine’s parts appears to be very good, though considering how much they sell for retail you’d expect it to be.

The model I bought is the HU-400, which happens to be black. If I’d been paying full price for it I’d have chosen a black model anyway, so it was just my good fortune that the discounted one I found on eBay was black.

Unfortunately this particular model doesn’t come with a recipe book, or at least the one I got didn’t have one included. You don’t really need a recipe book for making juice, but the Hurom is powerful enough to do a lot more than simple juices. Whether I’ll get round to exploring some of its more advanced features and options is a different matter entirely..

Assembly of the machine is pretty easy, though the instruction manual referred to two variants of the same model and I couldn’t work out which one I had, nor could I find the “spot” that part of the machine’s body supposedly has. Like a lot of electric kitchen gadgets, the Hurom juicer will not switch on unless it has been put together properly and all its parts interlock exactly the way they’re meant to.

The power button has three options:

For normal usage you simply turn it on and off, but the “reverse” option is there to help clear any possible blockages if you get fruit or vegetables stuck in the machine. (I haven’t so far!)

I had got the impression that the Hurom would take up less counter space than my Philips machine, but in reality there isn’t that much difference. The Hurom is taller, so you can’t operate it on the counter until you’re clear of the cupboards. While that’s not exactly a “deal breaker” it means that I’ll have to rejig my counter space, as I’ve ended up with the machine precariously perched on the edge of the counter which is far from ideal.

So what about the actual operation of the machine?

The fruit and vegetable chute is much smaller and narrower, so you need to cut or slice into much smaller slices. You also can’t “ram” things into the machine, as it doesn’t have any sharp blades or burrs like the centrifugal has. The cold press juicers work mainly on pressure, with the motor rotating the main shaft at about 80 rpm compared to the 18000 rpm of the Philips!

But who really cares about rpm? It’s a juicer, not a car!

Last night I took it for its first “drive” and I was truly impressed.

While it does take a bit longer to prepare the fruit for juicing (I personally hate peeling oranges) the end result is worth it.

Orange juice from my Philips centrifugal juicer was always a bit pale and unimpressive. It lacked “oomph”

With the Hurom cold press slow juicer the juice is a much deeper orange and the taste is far richer.

So far I’ve found that it can handle soft fruit easily, but without getting clogged up. Harder stuff, like ginger, goes through it pretty well.

Cleaning up afterwards is relatively easy, as you can simply pour a jug of water down the chute and turn on the machine. Due to the way the machine uses filters and some kind of mesh the water doesn’t just flow straight out, but works its way through the machine and expels a lot of the leftovers.

I’ll freely admit that I am impressed by how much juice it extracts from the fruit. You can see it in the pulp that’s expelled after – it’s practically dry!

I’d love to get my hands on the recipe book that the manufacturer publish, but it’s not available for download or purchase, or if it is I haven’t been able to find it! (Admittedly I did find one seller in the US, but with the price of the book plus shipping it would have been a very expensive read!)