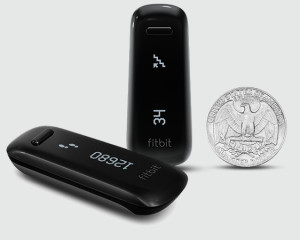 The Fitbit One shown compared to a coin

The replacement for my Fitbit arrived this morning, so I spent a few minutes setting it up. I had been using a Fitbit Ultra, but they’re not longer being made (even though you can still get them via Amazon and a few other online retailers). I opted for the Fitbit One, as it has a number of features that I really like from the Ultra and I didn’t want to live without them.

To say that setting it up was easy would be an understatement. It was incredibly easy! 🙂

Once you’ve unpacked the Fitbit One you’ll probably want to charge it, as it will probably arrive with an empty, or near empty, battery.

The box contains both a charging cable and a wifi sync dongle. Both connect via USB. You’ll also get a “sleep wristband” which you can use in bed for tracking your sleep. (As a side-note, I hope they sell spare charging cables and wifi sync dongles, as I can easily see them getting misplaced!)

Unlike the Ultra, the Fitbit One does not have a built-in clip, so you need to put it in the provided “clip” that ships with it in order to attach it to your clothing. Of course if you’re just going to shove it in your pocket you might not need it, but the clip also acts as a protective case, so using it probably isn’t a bad idea.

If you’ve got an iPhone 4s (or higher)  you can actually ignore the wifi sync dongle, though it might be a small bit easier to use during the initial setup.

The Fitbit One will sync using blue-tooth with a number of devices including:

You’ll need to download the desktop software, which is available for both OSX and Windows. Just go to: http://www.fitbit.com/start/one and follow the onscreen instructions.

The entire process only takes a couple of minutes and is, as I said, incredibly easy.

NB: If, like me, you’re upgrading / replacing a Fitbit Ultra you will need to download the software. The Fitbit One’s software is quite different to that provided for the Fitbit Ultra.

If you want to use the “silent alarm” feature you can set it up either using the mobile app or via the web interface and then sync with the device. I’ve set mine up and will hopefully be woken gently by it tomorrow morning .. though I sleep quite deeply, so it might not work!