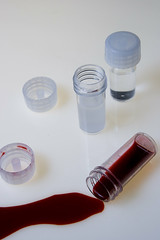 When I was in with the doctor earlier this week he took my blood pressure. Unfortunately he couldn’t do a blood test on me there and then as I hadn’t been “fasting” prior to the appointment.

So this morning after “fasting” since last night I was able to have a blood test. I wouldn’t consider it real “fasting” as it simply meant not eating from around 10pm last night, which isn’t exactly hard work.

I’m not sure how long I’ll have to wait to get the results of the blood test, though I suspect it will be a few days.

Am I worried about the results?

Not really. I’d prefer to know if there’s a problem than not know about it. If there is a problem I wasn’t worrying about it before now, so why on earth would I worry now?

As for the blood test itself. I’d love to say it was “painless”, but when someone puts a sharp needle into your arm it does hurt. But it didn’t hurt much. So let’s just say it was “relatively painless”! The entire operation took less than 5 minutes and the nurse was very charming and friendly. Seemingly guys have a tendency of passing out more than girls!