Up until quite recently I rarely bothered steaming vegetables. I’d happily plonk them in a saucepan of boiling water and go from there. However if you’re cooking things like mangetout or baby corn steaming is a good option.

Years ago I had various steaming equipment, but between various house moves stuff got misplaced, given away or simply discarded. Recently, as part of my new keto diet, I realised that I was going to be cooking more vegetables and steaming seemed like a good way to vary it. I ended up going for the Joseph Joseph Nest steaming pot set, which gives me 3 different sized baskets that are designed to clip on to the side of a reasonable sized saucepan. 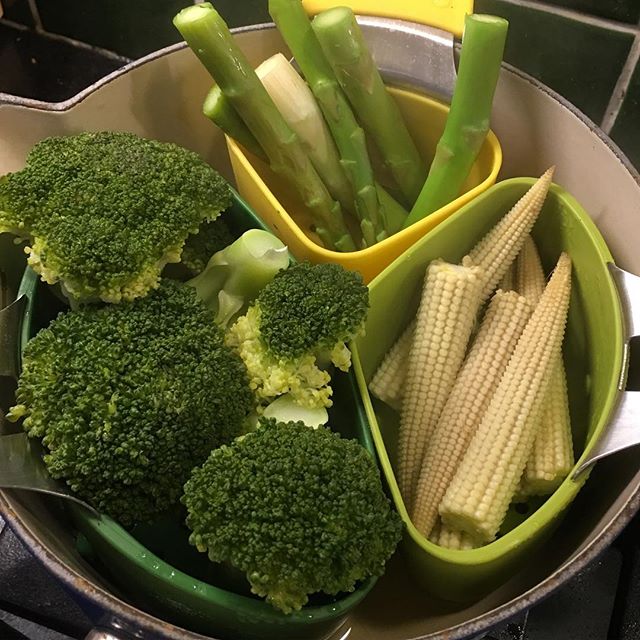 Having 3 different baskets means that you can put a different vegetable in each one as well as handling different cooking times.

To make the steaming process a little more interesting and flavourful I generally add some freshly cut herbs into the water. It’ll add flavour to the vegetables, but won’t be overpowering.

I’ve been steaming broccoli quite a bit over the last couple of weeks, mainly because it’s currently pretty cheap, but most vegetables can be steamed quite easily. Over the last while I’ve had asparagus, mangetout, broccoli, cauliflower and french beans. Due to my diet restrictions I have to avoid things like carrots, which is unfortunate.

No matter what kind of diet you’re on, however, steaming is always a good option as it’s almost impossible to overcook the vegetables with it and they’ll retain a lot more flavour and goodness than boiling them. I often will add a bit of butter to the vegetables once they’re cooked to give them a little more flavour, though depending on what you’re preparing and how fresh it is that might not really be required.