I’ll freely admit that I can be a little bit addicted to kitchen gadgets, but my addiction is more under control now that it was.. honest!

I know I sound like a broken record, but not having pasta has been one of the more annoying and painful aspects of switching to a low carb diet. The bean based “pasta” is edible, but I’d always quite liked the taste of spiralized vegetables aka courgetti.

I’d had several spiralizers over the last couple of years. The tabletop one was a disaster (for me) and the handheld one I’d been using was a pain to use and even more of a pain to clean.

The guys at Joseph Joseph have an excellent track record in producing practical kitchen and household gadgets that look great and work. Price-wise they aren’t the cheapest, but you’ll often find their products at reasonable prices if you shop around a little.

Their take on the spiralizer is excellent. It looks well, it doesn’t take up a lot of space and using it is very easy. 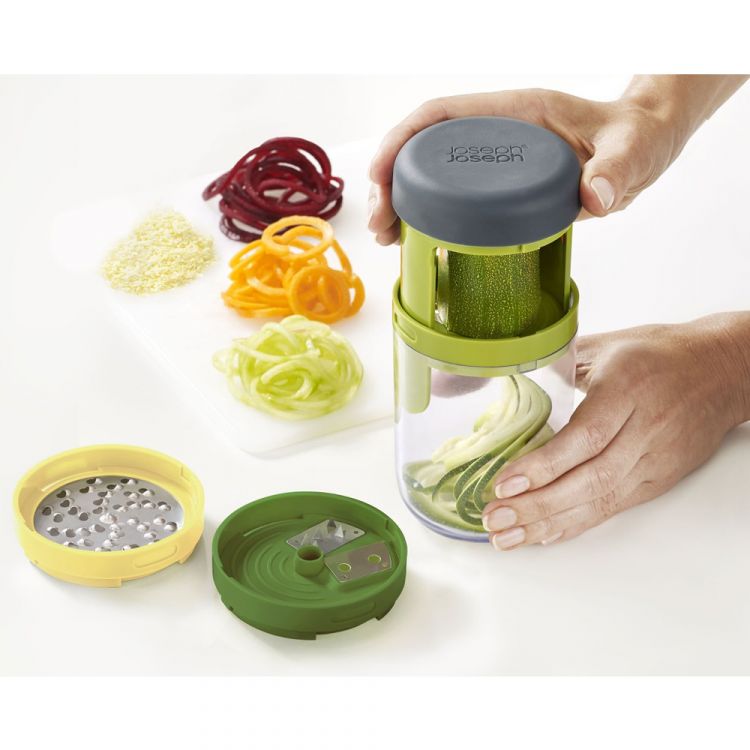 It comes with three different blades:

The coarse one works well for doing courgetti. The “fine” blade would probably work best for shredding vegetables for a salad or similar, while the grater is meant to be for doing carrots etc., in tiny bits. I’ll freely admit the only attachment I’ve been using is the “coarse” one, but it works well so I don’t need anything else!

You can see it in action in their video:

I’ve used it several times over the last few days and it has won me over for three reasons:

Once you’ve spiralized the vegetables, which in my case is most often courgette, it’s just a matter of sautéing them a little before serving with the pasta sauce I’ve made.

Overall I’m really happy with it.