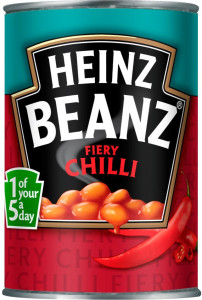 I hadn’t eaten baked beans for months, but last night I broke the habit and had some Heinz Beanz Fiery Chilli.

Apparently Heinz launched a new range of beans a couple of months ago and I picked up a couple of the varieties on a recent trip to a supermarket.

Last night’s flavour was Heinz Beanz Fiery Chilli, but there’s also Cheddar Cheese, Garlic & Herbs, Barbecue and Curry varieties. Most of them sound “interesting”, though I don’t know if I’d want to have cheddar cheese flavoured beans – that’s a little odd as a concept.

The chilli ones were pretty spicy and not as weak as some foods that are advertised as “spicy”, so I’d happily recommend them. Nutrition? About the same as standard beans:

I’ve been trying to cut down on the amount of bread and potatoes I eat in the last couple of months, so there was no toast on offer last night! I did sort of misbehave though and had a couple of fried eggs (practically no oil, since I was using the spray) and a couple of grilled sausages that I picked up in SuperQuinn. I really like  sausages with herbs and garlic, so I treat myself to some from time to time.

After spending a few days in Cuba, however, I’m going to have to work quite hard on regaining lost ground!