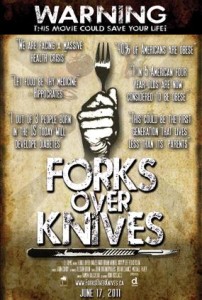 “Forks Over Knives” is well worth watching. Sure, it’s very American biased, but even if you’re not American you can relate to it.

In a similar vein to films like “Hungry For Change” and “Fat, Sick and Nearly Dead” the film talks about how the US (and worldwide) populations are suffering from a lot of ailments. What it does, however, is shows how, scientifically, these ailments can be linked directly to diet. For example, when the Germans invaded parts of Scandinavia they took away all the meat. That meant that the locals had to resort to more plant based foods to survive, which might not have been pleasant, as it was forced, but when you look at the health and mortality data for the period both before, during and after the occupation the numbers are very revealing. When the population switched away from the meat heavy western diet the number of people suffering from heart disease and many other ailments dropped.

I like “fact based”. But I don’t want to watch 90 minutes of statistics. That would bore me to tears.

Forks Over Knives isn’t boring. It has a nice mix of the science and the people, both the doctors and other professionals who have been conducting research into diet and nutrition and how it impacts health and their patients.

Personally I could not see myself cutting out ALL meat out of my diet completely, but I could see myself reducing it. (At the moment I do have weeks with zero red meat intake, but I usually have fish or chicken a couple of times a week)

The film is definitely “food for thought” and worth a watch.

The film’s available on both Netflix and iTunes.