I’ll freely admit to being mildly addicted to kitchen gadgets and gizmos. Any time I’m in a reasonable sized mall in the US I end up in the kitchen department of Macy’s or in the local “Sur la Table”

One of the things I picked up on a recent trip was this microwave friendly soup mug from sistema. Yes, it’s also available in shops over here, but I picked  it up along with a few other things 🙂

Anyway … I had been using my Stanley Classic Vacuum food jar, which I got a couple of years ago. The Stanley food jar works very well but I thought I’d give the sistema mug a go, as it’s a generous size 656 ml vs the Stanley’s 500 ml. 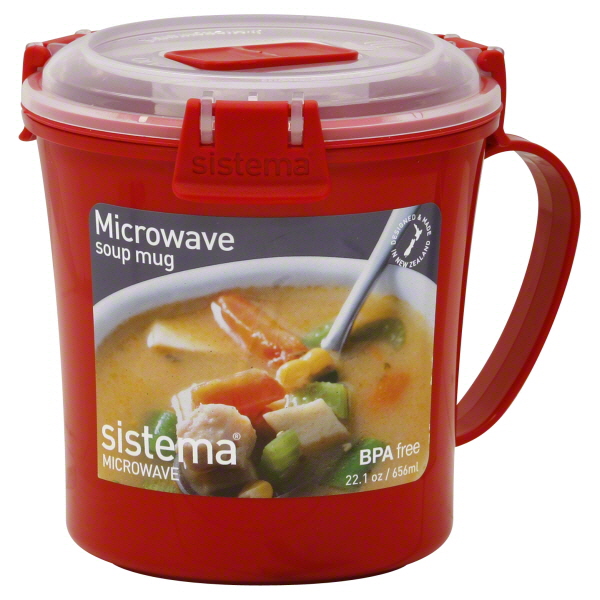 What’s interesting about the sistema soup mug is that it’s so sturdy. It’s got 3 clips that hold the lid on firmly and make a strong seal, so the liquid won’t seep out when you’re transporting it.

When you want to heat up the soup (or stew) you don’t need to take it out of the mug – it’s got a very well thought out air vent in the lid which you can simply pop open during the heating process.

One thing I did learn, however, is that heating up soups or stews can take a bit longer than you might expect. You’ll probably work out the right amount of time to leave something in the microwave with a little experimentation.

So you can eat the soup or stew directly from the mug once it’s heated up. Personally I prefer to move the heated up food to a proper bowl, but if I was in a hurry I’d probably eat it straight from the mug.

All in all it’s a pretty good way of transporting, storing and re-heating a single portion of soup or stew. Available on Amazon and other places.