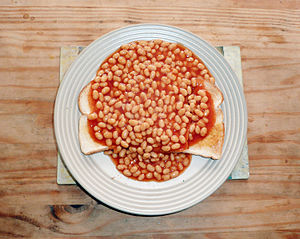 Some foods take you by surprise. Baked beans are shockingly healthy, if eaten in moderation.

Well it transpires that the humble baked bean is what’s known in some quarters as a “super food”.

They’re high in protein and are also a good source of fibre, which can help reduce cholesterol levels.

A simple yet tasty evening meal that I’ve had a few times is made up of beans on toast (a small tin – not the full size one) and a bowl of soup.

Using a microwave to heat both the beans and the soup it only takes about 5 minutes to prepare.

The toast is usually some kind of wholemeal bread with a light butter / margarine type spread on it.

It’s also incredibly cheap to make, which is always a bonus!

Other beans can be very tasty as well, though they generally come in brine only so they wouldn’t be that tasty on toast by themselves and lend themselves more to pasta or rice sauces.