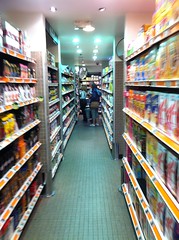 Supermarkets seem to hate single people. They probably aren’t really aware that they hate us, but they obviously do.

Apart from a couple of exceptions, such as Marks & Spencers, most supermarkets assume that there are at least two people eating their food. Want some chicken? It’s a pack for two? Want a bit of pork? No problem, but it’s a pack for two people.

Well I kind of know the answer to the question, but it doesn’t make it any less annoying.

I’d love to be able to go into a shop and not have to buy packets of food that are designed for two or more people. I hate wasting food. I was brought up to respect food and not to waste it, so I’ve spent years eating more than I probably should have done due to the way supermarkets package food.

You could ague that there’s nothing to stop me (or anyone else) from holding over the other half of a pack of meat (or whatever), but the reality is that once you open the pack the meat starts to go off. Sure it’ll probably still be edible, but it starts drying out and looks distinctly inedible.

Shop somewhere that has a butcher’s counter and get the butcher to give you only what you need. It might cost a little bit more than the packaged meat, but you’ll get to choose the cuts that you want and you won’t end up being tempted by the leftovers.

In Ireland we still have a number of excellent craft butchers, so if you can get to one it will be worth your while plus you’ll also be supporting local business. Where I live there are a couple nearby and SuperQuinn has a very good butcher on site. Other supermarkets can be a bit “touch and go”. Tesco’s meat counter isn’t exactly stellar, though that might vary depending on where you live. Dunnes Stores’ meat counter isn’t exactly amazing either, so I wouldn’t use it unless I had no choice. As far as I know none of the discount supermarkets have a butcher in store, so they’re out.

If anyone knows of Irish supermarket chains that actually cater to singles I’d love to know about them.