Over the weekend I dropped into my favourite local butcher and picked up some bits and pieces, including the pork that I used for making the pork schnitzels. While I was there I got some chicken breast, but I didn’t have any firm plans for it. This evening I didn’t feel like doing anything terribly elaborate, so I thought I’d try my hand at doing low carb chicken tenders. If you can do schnitzels using almond flour, why not other “breaded” meats and poultry?

Chicken tenders are basically just strips of chicken in a bread. Once they’re breaded you can either fry them, deep fry them or, as I did, do them in the oven.

If you want super mild, yet tasty, you could simply use some herbs and a bit of salt and pepper, but if you want to give them a bit more “kick” there’s no end to the combinations of herbs and herb mixes you can use. 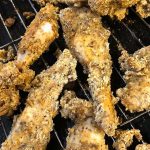 And no, you can’t really taste the almond! If you’re completely new to low carb cooking then you might notice a slight difference in the taste compared to more “traditional” flour mixes, but I don’t think it’s noticeable.

I’ve always liked adding a bit of sauce to meat and poultry. A bit of sauce can make a relatively bland dish much tastier and interesting. However up until recently I wouldn’t have bothered making a lot of the sauces from scratch when I can buy them readymade in the shop. But I discovered that not only are these sauces quite easy to make, but they’re also a hell of a lot nicer than anything you can get in a shop. Ok, that last bit was pretty obvious!

So far this week I’ve made both a mushroom sauce and a peppercorn sauce. I used both of them with steak served with a bit of vegetable on the side.

The peppercorn sauce I made last night, however, is something I’m particularly happy with. I’ve always loved pepper sauce and I’ve tried just about every instant and packaged pepper sauce that you can get in both the Irish market and further afield.

It turns out that making a peppercorn sauce is actually quite easy and doesn’t use weird or exotic ingredients. I made it last night for the first time, but I’m confident I’ll be making it more often in the future, as it turned out to be so easy and so incredibly tasty! 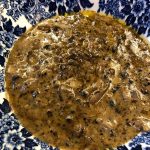 A peppercorn based sauce that goes well with steak or chicken. The peppercorns will give it quite a bit of bite

The quantities provided will serve 1 or 2 people, so you can simply multiply the quantities for a larger group.

As a small update .. 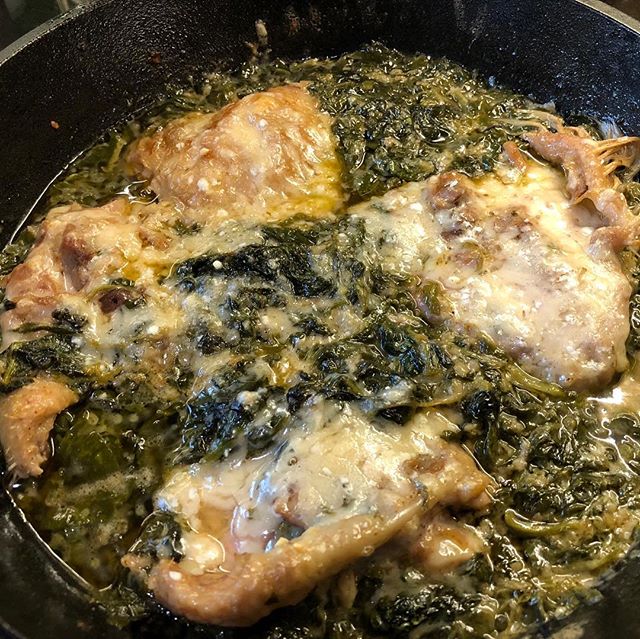 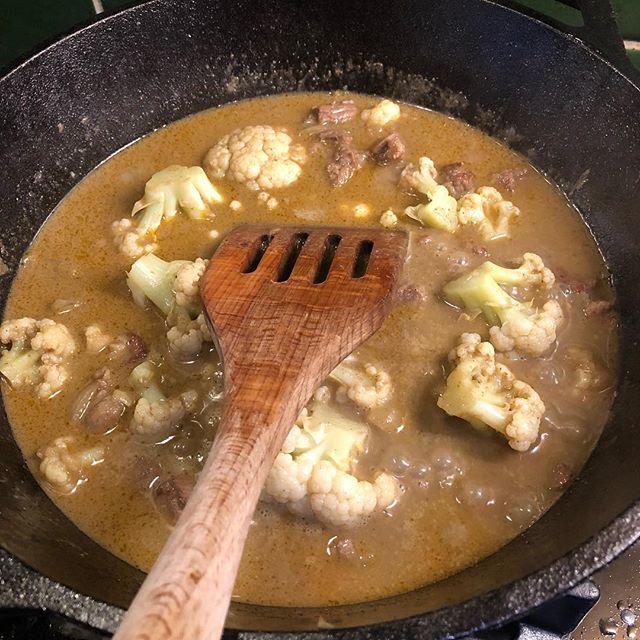 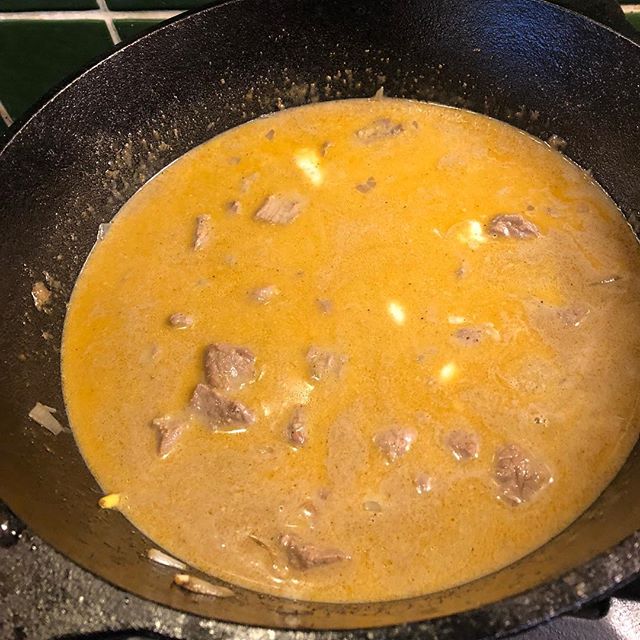 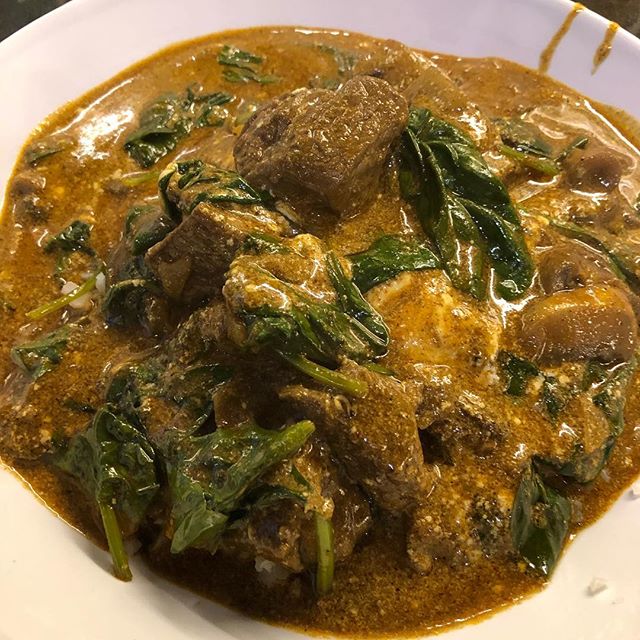 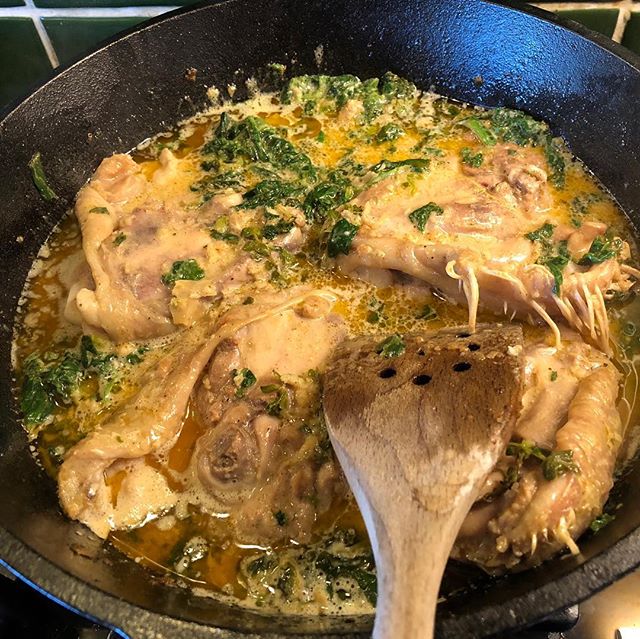 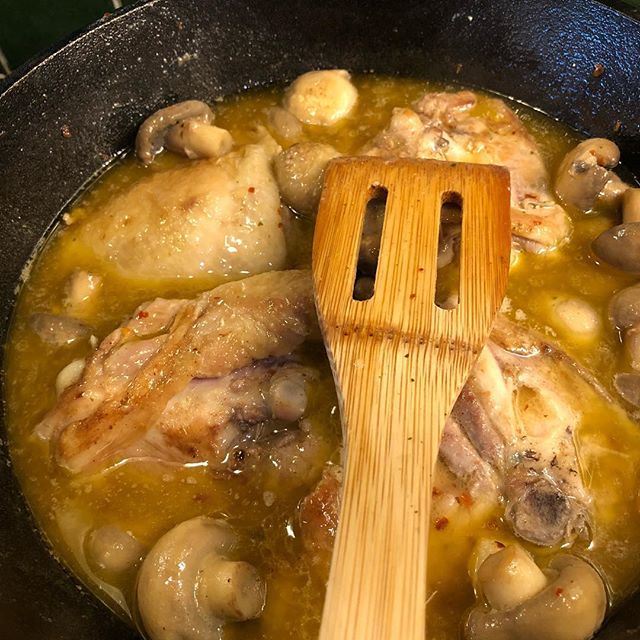 While I’ll freely admit that I have become quite addicted to cooking with my sous-vide, it’s not the only way I have for cooking food. The novelty of sous-vide has worn off to a degree, so now it’s a key part of my cooking, but it isn’t the only way I’ll cook!

I like getting meat from a butcher instead of a supermarket. There are a number of reasons for this, but a very good one is that the overall quality of the meat is usually better when you go to a local butcher. You’re also supporting a local small business instead of a faceless multinational supermarket chain!

My local butcher often offers “deals” where it works out to be more economical to buy more meat in one go than you’d normally use. I don’t like buying too much at one go, as it’ll go off before I get to use it and I don’t like freezing meat. One of the reasons I disliked freezing meat was that in order to cook it you had to first defrost it, then prep and cook it. So if you wanted to eat the chicken breast you froze last week you’d need to take it out of the freezer in the morning and hope it’d have thawed enough by the time you got home from the office.

With sous-vide cooking, however, you can make this process a hell of a lot simpler. Take chicken breast for example. You’ll often get several on special at the butcher or maybe your local supermarket is doing an offer on a tray. It’s more than one person or two are going to eat, so you’d normally either skip the offer or freeze half the pack. With the sous-vide you can cut that down to something a lot saner using some vacuum bags and a bit of seasoning.

Simply prep the chicken breast as you would if you were going to put it in the sous-vide ie. add some seasoning and then pack portions into the airtight vacuum bags. They don’t need to be anything particularly fancy – I’ve been using some of the freezer bags that you can get in most shops in packs of 20 or more. Pop the portions into the freezer.

Now when you want to cook some chicken breast just do it as you would normally in the sous-vide and simply add an hour to the cooking time. 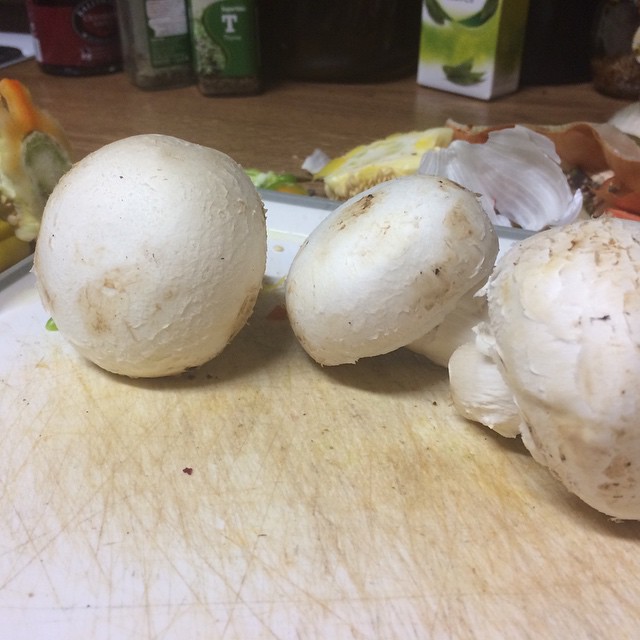 Weekends, as I’ve mentioned before, are a great time to do a bit of extra cooking. Instead of having a quick, rushed breakfast it’s possible to take the extra time to prepare something a little bit more elaborate and time-consuming.

Sunday evening can also be a good time to prepare a tasty dinner as well as doing a little bit towards preparations for the rest of the week.

In my case that meant that instead of simply prepping vegetables for dinner I also used the prepped vegetables and a variety of leftover vegetables to make a tasty soup. Yes, I’m still “cheating” and using a soup maker, but the end results is damn tasty.

So for the next couple of days I know what I’ll be having at lunchtime – homemade vegetable soup and probably a banana or some other fresh fruit.

Tonight’s dinner worked out pretty well. Chicken pieces with a load of vegetables and plenty of herbs. 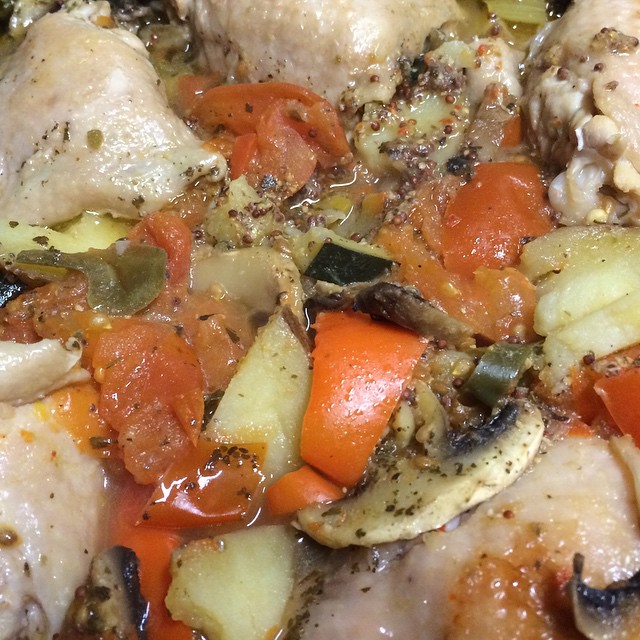 The vegetables were fresh, but unfortunately I’m currently stuck with dried herbs, as my track record with fresh herbs has been pretty bad (short version – they keep dying on me!). 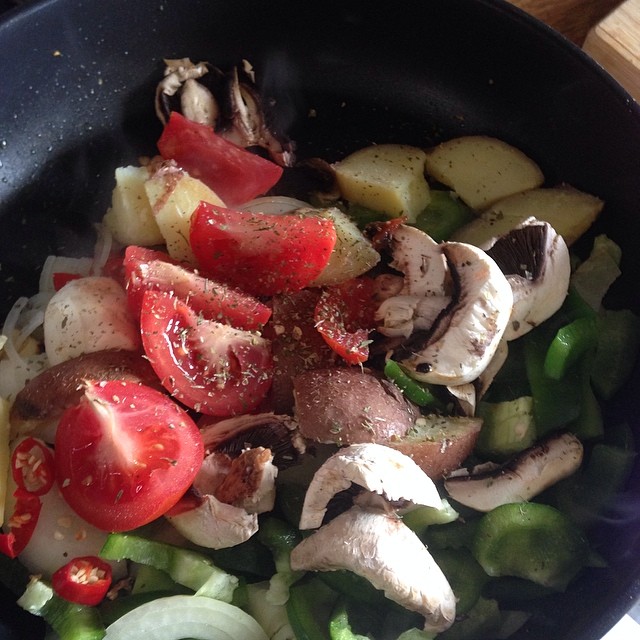 Today is a holiday in Ireland, so most of us weren’t working. A day like today is like an extended weekend, so I was able to to spend a little more time in bed and also to make a more elaborate breakfast than I would do on a “normal” day.

Last night I’d cooked a few potatoes with my grilled chicken breast. Of course there were leftovers, but that was semi-intentional. Adding a couple of potatoes to an omelette is fantastic, but the only way I’d do it is if I have some leftovers ..

So this morning’s omelette had:

The end result wasn’t the most aesthetically pleasing, as it sort of fell apart, but it was damn good!

Simple, healthy and so so tasty.. Grilled vegetables. This evening I did a red pepper, a few mushrooms and an onion. Grilling them on the George Foreman grill is pretty easy.
You can give them a bit more flavour by adding some mixed herbs.
You don’t need to use any oil, as fresh vegetables have plenty of water and other juices in them naturally. You do, however, need to keep an eye on them and make sure that they don’t get burnt. If you’re careful you’ll get a nice side dish for a steak or some grilled chicken. If you leave them too long you’ll end up with a carbonised mess! 🙂 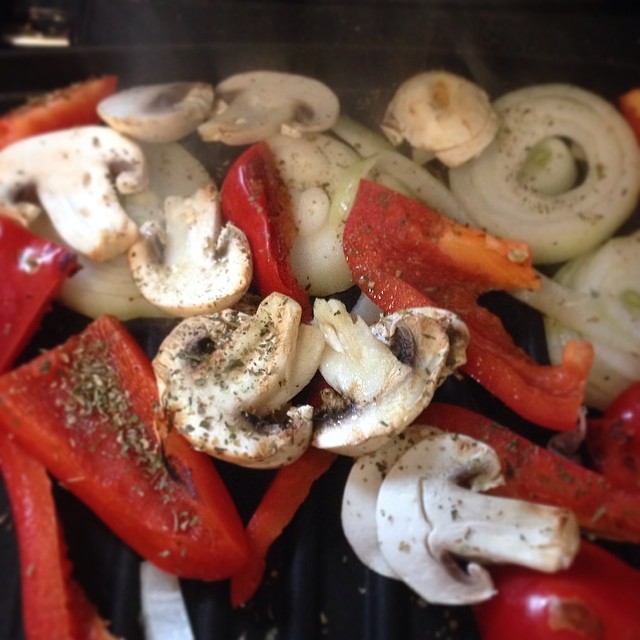