I mentioned recently that I’d acquired a sous vide precision cooker from Anova. I don’t use it every evening, but I have been using it quite a lot. When you’re on a low carb diet you end up eating a lot of meat, poultry and fish. And if you’re like me then you probably aren’t a maestro when it comes to cooking salmon properly without it disintegrating in the pan! Using the sous vide salmon fillets get cooked all the way through and practically melt in your mouth.

I’ve been enjoying using my Anova sous vide for the last few weeks and now I’ve realised how good the food is coming out of it I wanted to improve my setup a little.

One of the things that was bugging me was the “bath”. I had been using the largest saucepan I own. It took up a lot of space on the counter and since it’s metal it gets hot and of course I’m also paying to heat all that metal. That’s far from ideal.

Sous vide cooking has become quite popular so there are a lot of accessories available via Amazon and other marketplaces. Some of them are useful, while others really fall into the realm of “silly”. Getting a neater and better designed bath for my sous vide seemed like a good idea, as I can probably store the sous vide and its other accessories in the bath when it’s not in use for a few days. Pricing for them, however, varies a lot, with some places charging as much for a lid as they do for the bath. I’m sorry, but it’s just a lump of plastic with a hole cut in it, so paying crazy money for one just doesn’t sit right with me!

In the end I opted for a simple polycarbonate container with a lid: 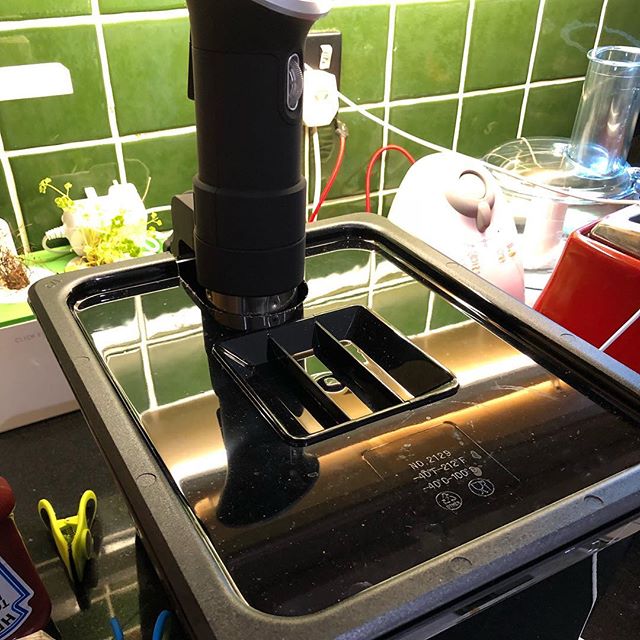 You can get one via Amazon or directly from companies like Sous Vide Tools. I paid around €25 for mine including delivery.

The other issue I had was the bags for cooking the food in. You can use freezer bags or Ziploc style ones. The only thing is that they’re essentially single use. Another option would be to get a vacuum sealer machine of some kind. There’s plenty to choose from and you can use them for storing food as well as your sous vide. I might get one at some point, but it’s yet another gadget for my kitchen and I’m not sure I *really* need it.

So what did I do?  For now I’ve opted for the Stasher re-usable silicone bags. They give a good seal and can be opened easily, unlike some of the freezer bags I’ve tried that you can close, but need to cut open. The material is quite thick and lends itself to being washed in the top shelf of my dishwasher. You can find out more about them over on their official site, though buying directly from there if you live in Europe will cost you an arm and a leg.

Who said being on a low carb diet had to be boring?