I’ve mentioned Obeo a few times in the past. They’re an Irish company that produces organic waste bags. Unlike the standard biodegradable bags that you’d put in a kitchen food waste caddy, the Obeo bags replace the bin completely. So instead of having to deal with the messy and smelly bin you simply dump the entire thing into your brown bin.

Unfortunately a couple of months ago the business came under pressure and they decided to stop trading: 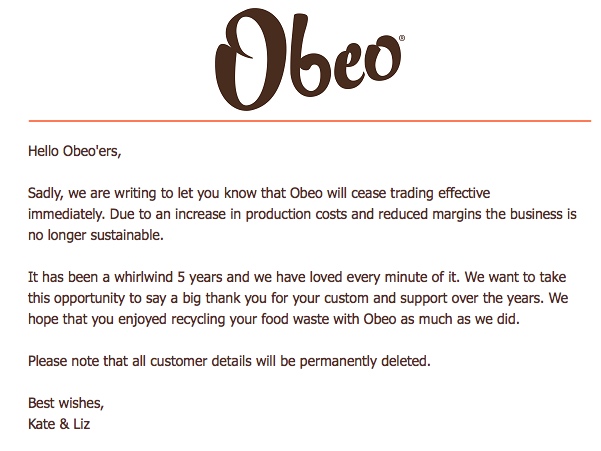 When I got that email I, along with quite a few other people apparently, were quite shocked and disappointed, as we thought the product was really good.

Fast forward a few weeks and the Obeo team decided to pivot their business a bit and to raise some cash by getting commitments from people for annual subscriptions. Note they’re not taking any money from anyone, they’re simply asking people if they’d commit to an annual subscription and if people do pay upfront they’ll get a full refund if the campaign goal isn’t reached.

You can read more about what they’re trying to do here.

Obeo is a very nice product. It solves a problem, which is what products should do.

The company behind the product is very small and they had done very well with their product being carried in some major supermarkets. Reading between the lines I suspect the production costs combined with having to extend credit terms to some of these shops might have combined to cause them the issues they ended up with. By switching to “online only” they should be able to keep going and potentially expand over time.
I wish them the best of luck

Disclosure: Much as I love the product I cannot commit to the subscription myself, as I simply do not produce enough organic waste – mainly because I travel quite a bit over the year. I’ve always bought Obeo in batches but I never subscribed.