Sometimes you get an urge for a particular dish. With me it was meatloaf. I got it into my head that I had to have it, but of course I wanted it to be low carb.

There are several excellent recipes for meatloaf that is compatible with a low carb diet – you don’t need to go very far to find them!

In my case I adapted a recipe from Ditch the Carbs, which is one of my “go to” low carb recipe sites.

My local supermarket didn’t have any pork mince, so I made my meatloaf with a combination of mince beef and mince turkey meat. Also as I was only cooking for myself I reduced the quantities quite a bit, though I did keep two eggs, as I felt that the mix needed them.

Also in order to make the mix into a loaf shape I used a silicone loaf mold pan.

Here’s a couple of shots to show how well it turned out:

The cooking time of about 50 minutes was fine, but I reduced the temperature about half-way through cooking to around 150 degrees centigrade, as I was concerned that the bacon would get burnt.

I put a grated carrot in the meat mix as well as some grated cheese. The end result, pictured above, was fantastic. I served it with some cauliflower mash, though it’d have been as good with any number of vegetables or low carb rices.

I’ll definitely be making this again!

A recent article I was reading gave a nice little list of low carb / keto friendly snacks that you can get on Amazon. Unfortunately it was Amazon US, not Amazon UK. So I thought I’d have a look at the list to see what was either available on the Amazon UK site or in local shops.

Now if you go onto Amazon US at the moment and do a search for “keto snacks” you’ll be amazed at how many companies are either focussing entirely on the low carb diet phenomenon or have tweaked their existing offerings. There are whole product ranges dedicated to keto – not just to “low carb”.

So what’s the situation in Ireland and the UK?

There are a couple of companies who have jumped on the low carb / keto bandwagon, but they’re fairly thin on the ground so far. However you don’t need special keto or low carb products to get snacks that are compatible. Sure, some products are by their very nature not low carb so a “low carb” or keto version is very helpful, but it’s not the end of the world if they’re not available (for now).

If you’re on a low carb or keto style diet and live in the UK or Ireland what are you eating as snacks?

I’ve been keeping an eye on apps, services and devices for people doing low carb diets for the last year or so. Some time back I came across Keyto, which sounded like it was going to be a simpler way to measure if your body was in ketosis or not.

It turns out that the device will do quite a bit more, as it’s tied into an app and offers several other features.

Keyto is currently available via crowd-funding platform Indiegogo, though based on the level of interest I wouldn’t be surprised if it went mainstream quite quickly.

At the moment you can order a Keyto for $99 US, which is about 40% cheaper than the current planned retail price.

When you’re in a hot climate you probably drink more water and other cold drinks than you would when you’re at home.

However if you live in a climate like Ireland’s it’s all too easy to not drink enough liquid. As I mentioned previously things like the Twinings’ infusions can help me drink more water during the day. But what about the evening?

I’ve found that herbal teas help a lot. I’ll drink large mugs of mint tea, green tea or some kind of fruity thing in the evening.

Plain green tea is meant to be really good for you, but it’s definitely an acquired taste. Drinking it with a stick of cinnamon makes it a lot more palatable!

You can easily get the more common herbal teas in pretty much any supermarket. You’ll always find a selection of mint, green tea and a few others both “own brand” and from some of the better known companies. However if you want to really “go to town” on herbal teas you might want to check out Twinings or the likes of Fortnum & Mason.

For the last couple of months I’ve been making low carb celeriac fries semi-regularly. They go really well with pretty much any dish that you’d serve fries with. But I wanted to try some of the alternatives to celeriac – apart from anything else not all shops stock celeriac.

So how about parsnip fries?

It turns out that parsnip fries are a good substitute to celeriac (as is turnip, though I haven’t tried that yet!).

I made my first batch of parsnip fries last night.

I won’t bore you with the details, but it’s essentially the same process as with the celeriac fries. The only real difference being that the physical shape of parsnip is quite different, so you need to peel them, top and tail them and then slice them up.

I used similar seasoning as I would with the celeriac fries and baked them in the oven for about 25 minutes. You’ll need to be careful as some of the smaller chunks can end up getting burnt, which isn’t exactly tasty!

The end result was pretty damn good, so it’s definitely something I can try again in the future.

As you can see from the photo above some of the fries ended up a bit burnt, but overall it worked out pretty well.

I served the fries with some nice low carb pork schnitzels and it was all very tasty!

However over the last couple of days I got an overwhelming yearning for crumble. I *love* crumble. It’s always been one of those desserts that I really like both to make and to cook.

So can you create a crumble without getting an overload of carbs?

The answer is a qualified yes. Yes, you can create a low carb crumble topping. The bit that’s going to be a little more of a challenge in terms of keeping your carbs down is the choice of fruit.

When you’re making a “normal” crumble you essentially make a shortbread style topping using butter, flour and sugar. Obviously the sugar is out, though you can replace it with an alternative sweetener (admittedly I didn’t in my experiment yesterday and simply did without). The flour has to be swapped out for a lower carb alternative such as almond flour or coconut flour, or a combination of both.

The one where you still have the issue with carbs that you can’t entirely avoid is in your choice of fruit for the filling. Apples are out. Berries, however, are much lower in carbs and can make a viable alternative.

The filling for a crumble is usually your fruit gently cooked with a bit of sugar and water. To go lower carb you can swap out the sugar for some natural honey.

So how did the experiment work out?

Personally I was happy with it. It can definitely be improved on, as I’d like a crunchier and more toffee like crumble, but it was very good.

Here’s a shot before I started to demolish it:

I served it hot with some Greek style yoghurt, which worked out to be a very nice combination. I would have used cream, but I was out of it! (Odd for me, since I use cream so much in my cooking)

Having chips (fries) with meat is something that you can’t do easily if you want to stick to a low carb diet. Potatoes, as I’ve said repeatedly, are simply not on the menu. While you can do a fantastic cauliflower mash it’s simply not the same as a portion of fries.

So what are your options?

There are quite a few sites devoted to the low carb or keto lifestyle, so there are plenty of bloggers sharing their recipes. It’s just a matter of finding the alternative to potatoes that works for you. Some of the recipes I came across would give you a nice “side”  but they wouldn’t come close to replacing the consistency of fries.

I ended up going with celeriac for mine, but apparently turnip is a good option too.

Celeriac is *not* a pretty vegetable. It really does look ugly: 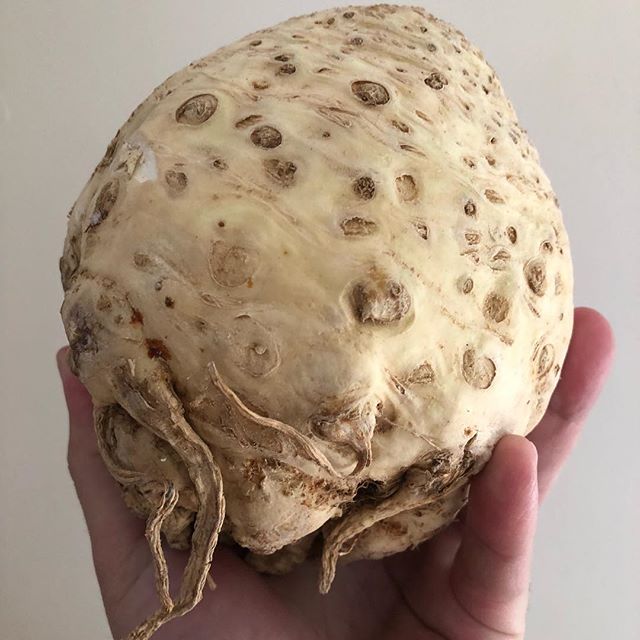 Making fries using celeriac isn’t complicated. You just need to treat the celeriac as if it was an oversized potato!

I used mixed herbs with paprika. You could easily use any other combination of herbs and spices that would go well with potatoes - the end result is very similar in consistency to potatoes, so you can treat it almost identically.

In terms of carbs celeriac is pretty good. It’s about 9g per 100g, so the amount you end up with obviously depend on how much you eat.